Creating A Video for Your Kickstarter Campaign: The Video Shoot

The most important thing about shooting your video is you need to be cool, calm and collected. You don't want to appear stressed out because viewers will pick up on this, but they won't know whether it is due to nervousness or personality. I find it best if you can find someone to help with the actual camera work, that way you can focus on getting your message across. You can still maintain control of the shoot if you like, there is just someone else handling the mechanics of the shoot. 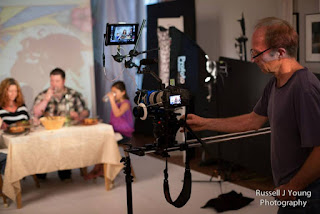 In terms of shooting the video, almost anything these days will do the trick. I've seen successful videos made with iPhones, Flip Video, and iPads. If you have access to higher quality recording devices all the better... most often the quality of your video will be a deciding factor as to whether someone will make a pledge or not.

Be creative in your search to create the best look and feel of your video. Perhaps an up and coming film maker would help you out for a nominal cost. Is there a local university with a video program? Ask around and you might be surprised by what you get. Sometimes letting go and allowing others to do what they do best will be what makes your project outstanding.

I find less is more in terms of scenery. You don't want too much going on in frame because it will detract from what is important. Obviously working shots will include various elements of your trade, but you'll want to try to keep clutter to a minimum.

Don't try to do it all in one day. The shoot for my video project included 3 days of filming, 1 day of recording audio in the studio, and 2 days of editing. If you are filming in multiple locations, you'll want to allow time to coordinate extras, transportation, wardrobe, etc. You'll also want to be relaxed during the process. If that means working for 3 hours one day, and several more hours the next day, all the better.

Look for continuity. I can't tell you how distracting it is sometimes to be watching a video, then all of the sudden the setting changes without explanation. I've seen items on the desk move around from take to take without explanation. You'll also want to pay attention to wardrobe and hairstyle. We had several amazing shots we wanted to use, but we weren't able to because my creative partner let her hair down between takes and the footage was inconsistent. Be very attuned to the smallest details on filming day because you will appreciate the extra care you took when it comes time to do the editing.

Next Step: Editing Your Video